What are open rates?

Open rates are the number of times an email from a campaign has been opened every 100 emails. Therefore if one person opens the email out of the 100 people that receive the emails then the open rate is 1%.

EmailWish will produce reports showing you your open rate, any links that have been clicked on, and whether someone opened an email more than once. You can view these statistics on the tab called ’email’ in your account. 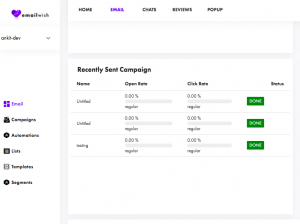 The ideal open rate is anything above 20%. Anything below is considered a low open rate.

Is the campaign a failure with low open rates?

There are many reasons that are indicative that a campaign is a failure. One of them is low open rates. If you are consistently receiving low open rates on your campaigns, then it more than a one-time and there might fresh strategies that you might want to look at.

Here are some of the reasons why you are receiving low open rates:

Still stuck? How can we help?

How can we help?

How EmailWish Counts Pageviews and Average Monthly Pageviews?What Metrics should I be looking at?

It's Easy To Get Started.

And It's Free. Two things Everyone Loves